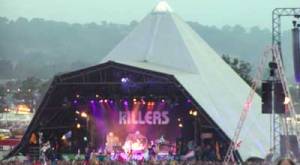 More than 100,000 people signed up for Glastonbury tickets on the first day of the festival's registration system.

The process, designed to beat ticket touts, requires fans to submit their details and a passport photo.

In return, they get a unique code, which must be quoted to buy a £150 ticket when they go on sale on 1 April.

Despite reports of problems with the website, organisers said things were "running smoothly" and reminded fans they still had a month to register.

"Our concern is that there are people out there in the world who haven't quite grasped that this is taking place," a spokesman said.

The glastonburyregistration.com registration website will be open until 28 February. Forms can also be collected from Millets camping shops.

Organisers have emphasised that registration does not guarantee a ticket and that there is no advantage for those who register early.

They have also announced plans to sell combined festival and travel tickets in an effort to boost the event's "green credentials".

"We are looking to increase the capacity this year from 150,000 to 175,000," said Melvyn Benn, managing director of Mean Fiddler, which holds the licence for the festival.

"One of the significant impacts could be the additional traffic that will create."

"I have put together a combined ticket and coach package and we are arranging for the coaches to arrive at the least busiest times," he said.

The Who, The Arctic Monkeys and Bjork are the first acts so far confirmed for Glastonbury, which takes place from 22-24 June, subject to approval from the local council.

Rumours have also linked the Chemical Brothers, Eric Clapton, Madness, The Kooks and the Scissor Sisters with the festival, which will be the biggest in its 35-year history.