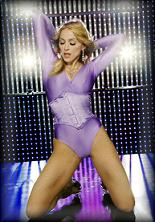 Madonna, Genesis, James Blunt and the Red Hot Chili Peppers will be among the headliners at the London show of the global series of Live Earth concerts.

They will be joined at Wembley Stadium by groups including Foo Fighters, Duran Duran, Snow Patrol and Razorlight.

Seven Live Earth shows will take place around the world on 7 July as a way of highlighting climate change.

In the US, The Police, Kanye West and Bon Jovi will be among the artists at the Giants Stadium in New Jersey.

More acts are still to be announced for both venues. There will also be concerts in Johannesburg, Rio de Janeiro, Shanghai, Sydney and Tokyo.

US HIGHLIGHTS
The Police
Bon Jovi
Roger Waters
Kanye West
Kelly Clarkson
Tickets, priced £55, will be limited to two per person and can be bought from 18 April.

The concerts aim to set a "green example" for other music events by using measures such as eco-friendly electricity, sustainable lighting and carbon-neutral travel.

Former US Vice-President Al Gore, who is one of those involved in organising the events, said he expected Live Earth to attract "an audience of billions".

"We hope Live Earth will launch a global campaign, giving a critical mass of people around the world the tools they need to help solve the climate crisis," he said.

All profits will go to organisations including the Alliance for Climate Protection, the Climate Group and Stop Climate Chaos.

The BBC has confirmed that it will be broadcasting the concerts on TV and radio in the UK.