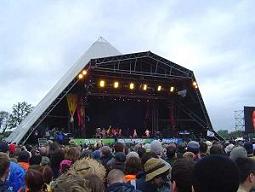 The full line-up of musicians to perform at the Glastonbury festival later this month has been announced.

The Who, The Killers and Arctic Monkeys will be headlining on the Pyramid Stage during the three-day event.

The festival, which starts on 22 June, will be the largest yet, with an extended capacity of 177,500.

That figure was agreed as part of a new four-year licence for the festival, taking it up to 2010.

"The line-up this year is so good we've even surpassed ourselves," said organiser Michael Eavis.

"You could not dream up what has happened to this festival. It never fails to amaze me."

Mr Eavis added that he is most looking forward to the performance of US singer John Fogerty on the Jazz World stage - and would then watch The Killers on the main stage afterwards.

Kasabian, The Fratellis, Bloc Party and The Kooks are among the other big acts which have been confirmed to play on the largest stage at the festival.

On the second Other Stage, Bjork, The Coral, Editors and Babyshambles will perform.

Headlining the John Peel Stage will be Hot Chip, The Twang and The Gossip.

It is the first time music lovers have had to register for tickets for the Somerset festival.

In March around 400,000 people registered by sending in their details and a photo of themselves in the hope that they would eventually be able to buy tickets.

Organisers have since hailed the registration process as a success as they say it has prevented touts from buying tickets.

This year festival-goers will be asked to make a difference to climate change by reducing their carbon footprint.

As well as eating organic food, washing in carbon neutral showers, using eco-friendly toilets and being supplied with recycled toilet paper, revellers will be invited to join the I Count campaign.

It details 16 steps to reduce their environmental impact, and aims to sign up 100,000 people in three days.

A small number of returned tickets go on sale on the See Tickets website on Sunday.