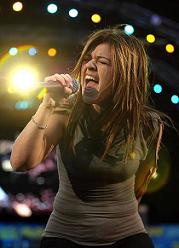 Kelly Clarkson has postponed her US summer arena tour after lower-than-expected ticket sales forced the artist to reconfigure the show's "size and scope," according to a statement.

The tour was supposed to begin July 11 in Portland.

"We came to the realization that we had bit off more than we could chew," says LiveNation CEO Michael Rapino, whose company is promoting the tour. "In the end, we are in the Kelly Clarkson business and for that reason we believe that this decision will only benefit her and her fans in the long run."

Current ticket-holders will be given first priority for seats once new dates, likely in the fall, are announced. "The fact is that touring is just too much too soon," Clarkson says on her Web site. "But I promise you that we're going to get back out there as soon as is humanly possible to give you a show that will be even better."

The tour news is another blow to the set up for Clarkson's new album, "My December," due June 26 via RCA. The artist has admitted she had to fight hard with label execs to release an album of entirely self-penned material, on the heels of her smash 2004 album "Breakway," which featured a number of co-writes with experienced songwriters.