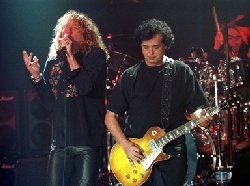 An estimated 20 million people rushed to register for tickets to see Led Zeppelin as soon as the band announced their reunion, promoters have said.

The remaining members of the legendary rock group will play a one-off show at the 20,000-capacity O2 arena in London on 26 November, they said on Wednesday.

The concert's website has struggled to cope with demand, and organisers have asked fans to be patient.

Registration for the £125 tickets closes at midday BST on Monday.

Tickets for the show will be allocated by public ballot - a move promoter Harvey Goldsmith hopes will deter touts.

"We just hope and pray that those people who get a ticket in a ballot are just going to act accordingly," he said

Goldsmith also warned fans who turned to internet auction sites like eBay or other unauthorised sources that they would have their tickets cancelled.

"They might have paid the money but they ain't going to get the ticket," he said.

Led Zeppelin were one of the most popular and influential rock acts of the 1970s, setting the template for heavy metal and shocking the press with their debauched lifestyle.

Best known for songs like Stairway to Heaven, Whole Lotta Love and Kashmir, they sold more than 300 million albums around the world.

They split in 1980 after drummer John Bonham died, and have only regrouped for a handful of shows and award ceremonies since.

It is being held in tribute to music mogul Ahmet Ertegun, who co-founded Atlantic Records and signed Led Zeppelin in 1968. He died in 2006 after a fall at a Rolling Stones concert.

Other acts lined up for the show include Pete Townshend, Bill Wyman And The Rhythm Kings, Paolo Nutini and Foreigner.

The idea for the tribute show came from his widow, according to Goldsmith, who then set about persuading Led Zeppelin to headline.

"I wrote to everybody and in particular to Robert and Jimmy and John Paul, and said: 'Look this is an opportunity for you to come together and really pay homage to your mentor and mine, and would you do it?'

"Much to my amazement they came back and said yes," he said.

According to the NME, Goldsmith said the band "have no plans to tour but hopes they will".

Profits from the concert will go towards scholarships in Ertegun's name in UK, the USA and Turkey, the country of his birth.