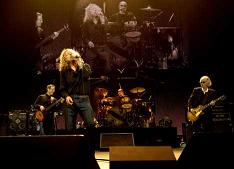 Led Zeppelin played a storming show at their first full gig in 19 years at the 02 Arena in London last night (December 10).

The long-awaited performance was the headline slot at a tribute show for Atlantic Records founder Ahmet Ertegun, who died earlier this year and was instrumental in building the band's career in the 1970s.

There had been brief reformations before - including Live Aid in 1985 - but tonight was the first full set the group had played since headlining Knebworth in 1979.

An estimated nine million people applied for the 18,000 tickets, and despite the quiet sound there was mass hysteria as the band performed their classics before a crowd including Paul McCartney, Oasis' Noel and Liam Gallagher, Pink Floyd's David Gilmour, Lulu, Arctic Monkeys, Kate Moss and Foo Fighters frontman Dave Grohl.

There were also a few surprises thrown in - the disco funk of 'Trampled Under Foot' from 1975's 'Physical Graffiti' made an appearance, as did 'For Your Life' from 1976's 'Presence' - the first time the band have ever performed the track live.

Plant spoke little during the show, but when he did it was mostly to pay tribute to Ertegun, who he said after first encore 'Whole Lotta Love' "ran the best label in the world" in Atlantic Records.

After playing classic 'Stairway To Heaven' the singer exclaimed: "Ahmet, we did it!"

He also said before 'For Your Life': "The past few weeks have been full of a thousand emotions for Ahmet, for bringing Jason (Bonham) in."

He also individually introduced each other member of the band during the course of the two-hour performance.

The four-piece, dressed almost entirely in black except for Page's white shirt, played in front of a massive video screen which featured straight shots of the band at first, but then exploded into psychedelic colours for 'Kashmir', the best received song of the evening.

Before that track, Plant delcared: "There are people from 50 countries here. This is the 51st."

Other acts who performed on the evening were Paolo Nutini, former Bad Company and Free frontman Paul Rodgers, and Foreigner frontman Mick Jones, all backed by former Rolling Stone Bill Wyman and his band The Rhythm Kings.