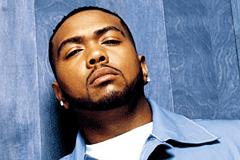 As Timbaland's "Shock Value" goes up for five Grammy Awards, the hitmaking hip-hop producer has announced a deal with Verizon Wireless to make the first "mobile album," which will be exclusively available to subscribers of V Cast, Verizon's mobile entertainment service.

As Verizon's mobile producer in residence, Timbaland will produce one song per month throughout 2008. Each month, he will work with a different artist on a track while touring the country on the Verizon Mobile Recording Studio Bus, which will also capture making-of footage for V Cast subscribers on a dedicated Timbaland channel. He will perform in some tour cities to be announced, and Verizon will select subscribers to visit the tour bus in other cities to watch him work his magic.

Timbaland says the deal will let him reach more fans because "every place don't get a CD [but] everybody has a mobile phone." Plus, there's history to be made. "Just producing a mobile album has never been done. I'm the first to ever do it," he says.

And while major artists have of late left major labels in bids to reach fans in new ways, Timbaland isn't leaving Interscope, which put out "Shock Value" and distributes his Mosley Music imprint. (However, he says he is out of contract with the label to put out his solo albums.) Interscope is involved in the Verizon deal from the standpoint that Timbaland plans to work with the label's artists for the mobile-only tracks. Whether a mobile album deal could replace a major-label deal in the future, "that's something we'll have to see," Timbaland says.

Each mobile Timbaland track will be released days after it is produced. Songs will be released as a full-length download, ringtone and ringback, and will be available only through V Cast and Verizon. Mobile song downloads will cost $1.99 each and include a copy for the PC. V Cast subscribers also can download the track through Verizon's Web site and other Verizon platforms.

"This is truly mining each single for value and helping the artist and consumer connect along the way," Ruth says.

At the end of the year, some sort of compilation "album" will be released exclusively through Verizon, according to Ruth. Whether the music is worked to radio during the exclusive period or made available via broader distribution afterward is up to Interscope.

Verizon is already in talks to sign additional artists to its mobile producer program as it continues to expand its entertainment offerings, and Ruth says the company is hoping to work with Timbaland beyond this first album.

"What's unique about Tim is his producing--he's produced in every single genre you can think of, and he's shown success," Ruth says. "We have a broad consumer base. Tim helps us to speak to the broadest bunch of all of them."

For his part, Timbaland says he isn't focusing on a particular genre for the project. "I'm just going to have fun with it," he says. "I'll just do what comes in mind."

The partnership kicks off today with a pre-Grammy party co-hosted by Verizon and People magazine. During the event, Timbaland will debut the first Verizon song, which features Mosley Music artist Keri Hilson. Timbaland and Hilson recorded two tracks during a three-week period last month, one of which will be introduced at the party and go mobile within a few days.

Timbaland hasn't yet revealed what other artists he will be working with for the project, but Ruth says some of those on the party's guest list will be involved. That roster includes fellow Mosley Music act OneRepublic, Paramore, Flo Rida, Natasha Bedingfield, Taylor Swift and Chris Cornell, who will perform.

"How I prepare for [the new album] is, I just do it, like any other album," Timbaland says. "The only difference is it's immediate."