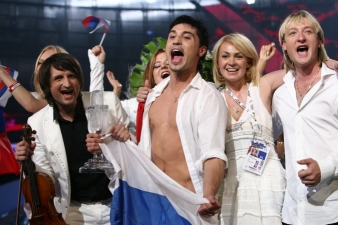 Germany and Poland also received 14 points each, but they officially finished above the UK because their top scores in a single round were higher.

Bilan is a well-known performer throughout Russia and beyond, having been named best artist at the country's MTV Awards for the past three years in a row.

He took part in Eurovision in 2006, finishing second behind Finnish rock monsters Lordi.

He has recorded an album in English with Timbaland, including a duet with Canadian singer Nelly Furtado, and hopes to use it to break into the international market later this year.

The BBC's Fiona Pryor in Belgrade

This year's other entrants included Latvian pirates, a Finnish heavy rock group, a 75-year-old Croatian rapper and French dance musician Sebastian Tellier, who has worked with Daft Punk and Air.

Swedish singer Charlotte Perrelli, who won the event in 1999, was another hot tip and was picked as the winner in a Europe-wide BBC poll before the event.

But she failed to become the first female singer to win the contest twice.

The show was opened in front of 20,000 fans at the Belgrade Arena by last year's winner Marija Serifovic.

The 20 countries that came through the semi-finals joined hosts Serbia plus the UK, France, Germany and Spain - the contest's four biggest backers.