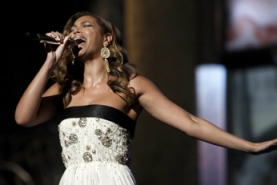 Beyonce and the Black Eyed Peas have been lined up to headline a gig in Singapore, which will coincide with the Grand Prix there next month.

Formula One chief Bernie Ecclestone said: "It's exciting. It's something we've been talking about doing for an awful long time."

Mr Ecclestone said Singapore "couldn't be a better place" to launch the event.

"They're well, well ahead of anyone else in the world in my opinion."

Talks are already taking place between gig organisers and global broadcasters as it is hoped the show will be transmitted in up to 188 countries.

The website said F1 Rocks will "fuse the world's most popular annual sporting series with the most iconic music stars to create an unrivalled experience for F1 and music fans alike".

The music acts are being booked by John Giddings, who resurrected the Isle Of Wight festival and now promotes the likes of Madonna and U2 for Live Nation.

Universal Music, Singapore Tourism Board and LG Electronics are also involved in the venture.