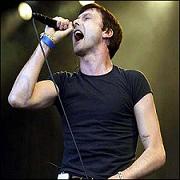 The band played at a packed 100 Club in the UK capital, a venue they last played 18 years ago. The intimate warm-up show for their forthcoming sold-out Teenage Cancer Trust benefit concert in the UK capital’s Royal Albert Hall saw fans pay upwards of £200 a ticket in a charity auction.

The 'Coming Up'-era line-up of the band's hour-and-a-half set was made up of material taken from all five Suede albums, and two B-sides. However, 1992 debut single 'The Drowners' did not feature.

With Bernard Butler's replacement Richard Oakes on guitar, Neil Codling playing rhythm guitar as well as keyboards, Mat Osman on bass and Simon Gilbert on drums, singer Brett Anderson led the band through a hit-laden set, though at one point the rest of the band left the stage for him to play 'Stay Together' B-side 'The Living Dead' alone on acoustic guitar.

A clearly emotional Anderson thanked the crowd at the end, saying: "All I have to say is I loved playing tonight. It's been beautiful. Lets do it again in another seven years time."