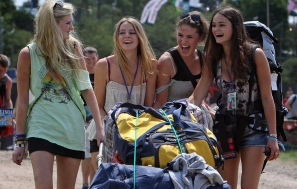 Thousands of music lovers have started arriving for this year's Glastonbury Festival at Worthy Farm in Somerset.

Although the music does not start until Thursday, police are warning that heavy traffic is building up around the site and people should expect delays.

Unusually, forecasters have predicted hot weather for the three-day festival, following the downpours of recent years.

Gorillaz, Muse and Stevie Wonder are headlining on the main Pyramid Stage.

All 140,000 tickets have been sold and, in an attempt to ease traffic flow, organisers opened up the site's car parks on Tuesday night.

But, with an estimated 100,000 fans arriving at the grounds on Wednesday, there have already been traffic problems.

Local police are warning people to expect long delays the closer they get to the site. Organisers have distributed water to cars stuck in the traffic jams.

A spokeswoman from Somerset and Avon police said: "We had 15,000 vehicles on site by 10am, and there was still a lot to come.

"Our advice would be to make sure you bring plenty of food and drink and be prepared for long queues.

"Everyone will get in eventually, it may just be a long wait."

England's 1-0 victory was shown on the Pyramid Stage screens and with Fabio Capello's players securing a place in the last sixteen, organisers say later matches will also be shown live.

Cartoon hip-hop band Gorillaz were a last-minute addition to the festival's line-up, after a back injury forced Bono and U2 to pull out.

Speaking to BBC Radio 4's Front Row, bandleader Damon Albarn admitted he was feeling nerves ahead of his slot on Friday night.

"This morning I woke up and the first thing I felt a wave of anxiety about - is an audience that size going to respond to our songs? I don't know."

Albarn said last-minute rehearsals were taking place as the band's many guest vocalists and musicians arrived at Worthy Farm.

"Lou Reed [is] arriving and, fingers crossed, coming straight to rehearsal. And then we watch the game.

"Strict alcohol ban, which is not in our nature, but considering how much we've got to get done..."

This year, Glastonbury revellers will be celebrating the event's 40th anniversary.

Dizzee Rascal, The Scissor Sisters, Faithless and Hot Chip are among the 350 acts that have been booked to perform over the weekend.