Rilo Kiley announce that they split up 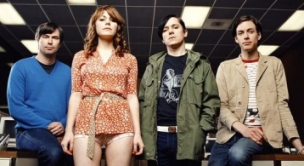 The quartet, who feature Jenny Lewis as their lead singer, were thought to be on hiatus while Sennett recorded as part of The Elected and Lewis worked as part of Jenny and Jonny with her partner Jonathan Rice, but the guitarist has now said they will not be reuniting.

Speaking to Spinner, Sennett explained the reasons for the split: "I just felt like there was a lot of deception, disloyalty, greed and things I don't really want to submit myself to. I had related that frustration to music but I just thought, 'I'm not going to put myself in that position again,' so I said, 'Fuck that, I can't do this anymore.'"


Rilo Kiley released five studio albums over their 13 year career, with the last, 'Under The Blacklight', in 2007. Sennett also spoke dismissively of the album, saying: "I don't think it was our best record by far. I think that it could have been our best but I think we were under pressure. There were some of our best songs on that record but some of our worst songs. We have a ton of old tracks that are better than a lot of the stuff that did make the record."

Sennett has said that he intends to release a compilation of the band's unreleased material, adding: "I think we're going to try and release a two-disc set of 40 songs, or something. I think that can be more considered like our last release, to me."