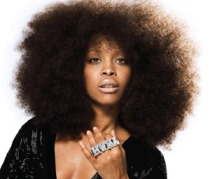 Muslim-majority Malaysia on Tuesday banned a planned concert by Erykah Badu after a photograph appeared showing the Grammy-winning singer with the Arabic word for Allah written on her body.

The American R&B singer was scheduled to perform Wednesday in Kuala Lumpur, but some Muslim groups said Badu was an unsuitable role model for young Malaysians after seeing a publicity photo of her with what appeared to be temporary tattoos of the word Allah on her bare shoulders.

A government committee that includes police and Islamic policy officials decided to forbid Badu's show because the body art was "an insult to Islam and a very serious offense," Information Minister Rais Yatim said in a statement.

The photo of Badu had "triggered public criticism that could jeopardize national security and cause a negative impact to the government's image," the statement added.

The 41-year-old, Dallas-born singer had already arrived in Malaysia. She can stay as a tourist but will not be allowed to perform, an Information Ministry official said on condition of anonymity because he was not authorized to make public statements.

Razman Razali, managing director of the show's Malaysian organizer, Pineapple Concerts, said his company hopes the ban will be reversed.

Badu is "worried and dismayed," Razman told The Associated Press. She was slated to perform in an auditorium that can hold about 3,000 spectators.

It was the first concert by a Western performer to be banned in Malaysia in recent years. Several other stars, including Gwen Stefani and Avril Lavigne, were told to dress modestly while performing.

The photograph of Badu, which also appears on her official fan website, attracted attention after Malaysia's most widely read English-language daily, The Star, published it Monday.

On Tuesday, the newspaper apologized to Muslims for what it called an "oversight," saying it deeply regretted any offense sparked by the photo, which was "inadvertently published." The Home Ministry summoned The Star's editors to explain the photograph, which caused some Muslim activists to demand the newspaper's suspension.