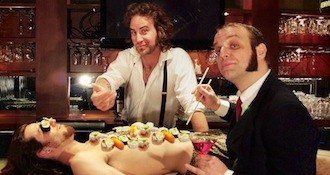 The In & Outs, a high voltage and electrifying rock trio have announced their next European Tour as backing band for fellow local artist Joseph Edgar along with their own shows in Ireland and France.

"We are very excited to be in Europe again this summer; we were in France last year and are really excited to perform there again along with stops in Ireland and Switzerland. We're also working on completing our new album that we plan on releasing later this year and this tour will be the perfect opportunity to test out our new tracks to a foreign audience.

We're looking forward to coming back to Canada very inspired from this experience and able to finalize our new album with some great ideas." says David Groover, lead singer and guitarist of The In & Outs.

Blending an expert mix of folk-guitar, funky-blues bass and reggae-jazz drums, The In & Outs' vast influence of diverse genres from Johnny Cash to The Doors, passing through Elvis Presley and John Spencer, amongst others can be heard on such tracks 'Boo My God', 'Me, Myself and My Guitar' and 'Often On The Moon' from the bands 2009 debut full length 'Ascending Back And Forth'.

Truly unique, The In & Outs have demonstrated more than a profound love of music. They also reflect the ups and downs of life and the essence of a society which is expressed in its eclectic lyrical content. In their own way, The In & Outs amalgamate a biting and realist poesy that they transmit to their public in a stream of energy.

The band is currently in production of their second album, set to be launched in late fall 2012.