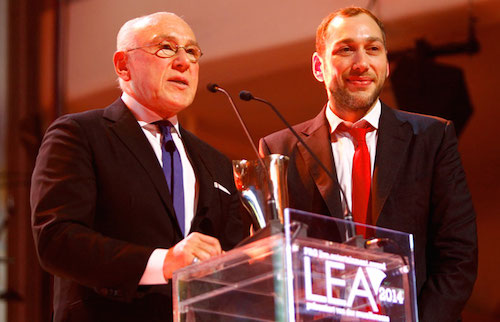 Rock, pop, beat-music, show and glamour set the tone at the Festhalle Frankfurt in Germany, which was home for the 9th award gala of the PRG Live Entertainment Award (PRG LEA).

The festive event with approx. 1300 guests from the national and international music, event and entertainment industry again marked the official opening of the Musikmesse Frankfurt and the technical fair „Prolight + Sound“.

13 of the popular trophies were awarded to promoters, artist managers, concert agents as well as concert hall and venue operators. LEA No 14, the award for exceptional youth promotion/support has already been handed over to the Freundeskreis der Anne-Sophie Mutter Stiftung e. V. at the press conference on 13th February 2014.

Laudators like Klaus Meine and Rudolf Schenker (Scorpions), the singers Rea Garvey and Helmut Lotti, Germany`s „Pop Idol“ winner Beatrice Egli and the acting siblings Ben and Meret Becker honoured the Festhalle Frankfurt with their presence. „It was a LEA of contrasts, a meeting of the flagships of the live entertainment industry with the young, quick speed and powerboats, all these smaller agencies and event companies who set sail in German show biz“ said Jens Michow, producers of the show and president of the Bundesverbandes der Veranstaltungswirtschaft (bdv). „A get together of old and young with remarkable cooperation and synergies. But also with exciting solos.“ Markus Frank, Frankfurt`s Deputy Mayor and Head of Department of Economy, City of Frankfurt again was very pleased with the gala: „Events like the Live Entertainment Award set their spots on our city and prove that Frankfurt – apart from being Germany`s financial centre, a traffic hub and one of its most important economic spots – offers a lot of exciting, cultural and creative highlights.” The metropolis on the banks of river Main hosted the LEA gala for the fourth time.