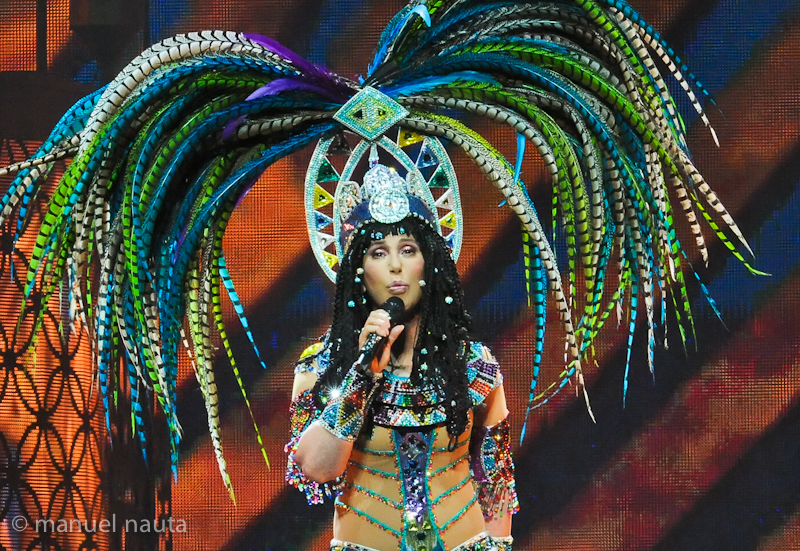 Cher takes her Dressed to Kill tour to No. 1 on the weekly ranking of Hot Tours with more than $15.5 million in revenue reported from the legendary entertainer’s ongoing North American trek. Sold out performances from April 23 through May 17 are included in this tally that adds another 177,239 sold tickets to the tour’s overall attendance total which now tops 340,000. Since launching in March, gross sales from the tour’s 27 shows have surpassed the $30 million mark.

Pop star Cyndi Lauper joined the show as the opening act beginning with the performance at First Niagara Center in Buffalo, N.Y., the first date in this week’s report. Among the 14 arenas in this tally, the top gross and attendance counts are claimed by two different venues. The Izod Center in the New Jersey/New York metropolitan area drew the largest crowd with 14,893 fans present on May 10, but Philadelphia’s Wells Fargo Center produced the top gross of $1,570,731, $17K more than Izod. The highest sales total since the tour began belongs to Toronto’s Air Canada Centre with $1.7 million in revenue from an April 7 performance.

The Dressed to Kill tour will continue its first North American leg through July 11, closing with a concert at San Diego’s Valley View Casino Center. After that performance Cher will be off the road for two months, but a second jaunt through the U.S. and Canada will kick off on Sept. 11 in Albany, N.Y. The second leg will stop in 11 U.S. cities during September and October and wrap with a return engagement to Toronto on Oct. 4 and 5. Veteran rockers Pat Benatar and Neil Giraldo will return to provide support for the fall leg, just as they did for the tour’s first 13 concerts.

Michael Bublé makes an appearance on Hot Tours for the second week in a row, this time claiming the No. 2 slot with $6.2 million in ticket sales from a four-show engagement in Sydney during his four-week run through Australia and New Zealand. The To Be Loved tour’s Oceania trek during April and May included performances in six markets. Bublé performed at Sydney’s Allphones Arena on May 9 and 10 and then traveled to Brisbane to play two concerts. He returned to the Sydney arena on May 16 and 17 for two more performances, logging an overall attendance total of 49,113 for all four shows. The To Be Loved tour wrapped its run Down Under on May 22 but is set to begin a second leg through North America this summer, kicking off on June 19 in Vancouver.

Country music artists Willie Nelson and Alison Krauss chart among the 10 top-grossing Hot Tours for a third consecutive week, landing at No. 8 with revenue reported from the pair’s first co-headlining tour. Each artist is touring with their full band during a three-month trek through North American cities. The tour began in early May and will continue into the summer with bookings schedule through July 20. This week’s report includes outdoor amphitheater performances on May 16 in Nashville and May 18 in St. Augustine, Fla. Arena dates in Huntington, W.Va. and Columbus, Ohio were reported in earlier weeks. Americana band The Devil Makes Three was the opener for all four performances.