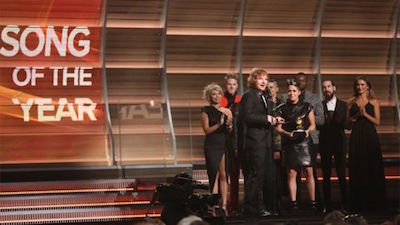 British singer Ed Sheeran also won his first two Grammys for song of the year and best pop solo performance for his number one hit Thinking Out Loud.

"We wrote [the song] on a couch in my house. Thanks to my parents who`ve flown to the Grammys every year for the last four years and every time I lose I say `maybe next year`," he said as he collected the award.

Taylor Swift`s 1989 has won the album of the year award at this year`s Grammys in Los Angeles.

Swift was equally surprised at winning the top honour. Her album, which was released in 2014, came out too late to be eligible for last year`s awards so was finally recognised at this year`s ceremony.

She gave a powerful acceptance speech saying: "As the first woman to win album of the year at the Grammys twice, I want to say to young women: There are going to be people along the way who will try to undercut your success or take credit for your accomplishments or your fame.

"But if you focus on your work and don`t let those people sidetrack you, someday when you get where you`re going, you`ll look around and you`ll know it was you and the people that love you that put you there. And that will be the greatest feeling in the world."

Mark Ronson and Bruno Mars won two awards for their hit Uptown Funk, including record of the year, while Meghan Trainor was named best new artist.

Justin Bieber also won his first Grammy for his collaboration with Skrillex and Diplo, winning best dance recording for Where Are U Now.

Outside the main categories, Amy Winehouse won a posthumous Grammy thanks to Asif Kapadia`s documentary on her life, with Amy winning best music film.

Swift opened the ceremony with a rendition of her song Out of the Woods and was one of many who performed during the show, along with Lamar, Adele, Ellie Goulding, James Bay and The Weeknd.

Rihanna had also been due to perform, but pulled out at the last minute on doctor`s orders due to bronchitis.

There were also a number of acts who gave tribute performances - Lady Gaga sang a medley of David Bowie songs, Jackson Browne and The Eagles performed in honour of Glenn Frey and Stevie Wonder remembered Earth Wind and Fire`s Maurice White.

Hollywood Vampires - a supergroup made up of stars including Alice Cooper, Johnny Depp and Joe Perry - also performed in tribute of Motorhead`s Lemmy.