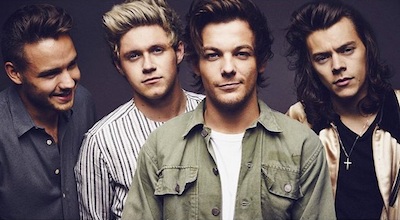 One Direction tops this year`s list of Europe`s highest paid celebrities, despite having spent it on hiatus.

As a group, Harry Styles, Liam Payne, Louis Tomlinson and Niall Horan brought in $110 million over the past 12 months, Forbes reports. This income comes from the tail-end of their $200 million-plus On The Road Again tour and endorsement deals with Pepsi and Colgate. All of this made 1D the top-earning band in the world and the second highest among all celebrities, trailing Taylor Swift`s $170 million.

Adele locked in the third-place position with $80.5 million, thanks to sales of her 2015 album 25 and her global arena tour. She is the list`s only woman.

Elsewhere, the Rolling Stones placed fifth with $66.5 million, followed by Calvin Harris with $63 million and Paul McCartney with $56.5 million. U2 placed ninth on the list with $55 million.

Showing the list`s age range, 1D`s Styles is the youngest at 22 and the Rolling Stones` drummer, Charlie Watts, is the oldest at 75.