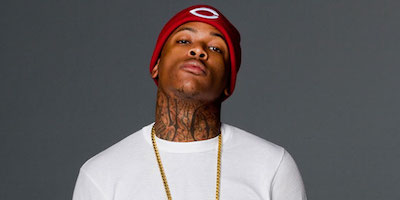 The Los Angeles-based artist will be represented by a UTA team of agents on behalf of his interests in all areas. He is co-managed by Brandon Moore of 4Hunnid along with Brad Scoffern and John Bogaard of Ceremony of Roses.

YG has worked with the likes of Drake, Schoolboy Q, Lil Wayne and E-40 during his career to date. He rose to prominence when he teamed up with DJ Mustard and Ty Dolla $ign on Toot It and Boot It, the track which lead a record deal with Def Jam Recordings in 2009.

His 2014 debut album My Krazy Life entered at No.1 on the Billboard Top R&B/Hip Hop and Rap charts, and No. 2 on the Billboard 200. His second album, 2016’s Still Brazy, featured appearances from Drake and Kamaiyah.

In August of last year, YG, alongside Moore, launched his label 4Hunnid Records with distribution by Interscope Records.

In December, he announced that his next mixtape, Just Re`d Up 3, will be released in 2017 and will be executive produced by YG and DJ Mustard.