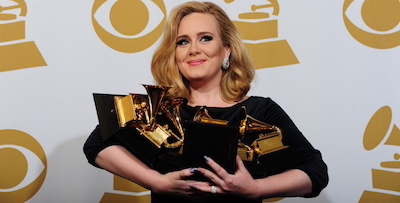 The 59th Grammy Awards kicked off with Adele`s Hello, and the evening ended up being very much owned by the UK star, who picked up five awards, including three in the biggest categories.

Meanwhile, the heavily pregnant Beyoncé was crowned the Queen of the evening with a superlative performance, a tribute to motherhood, but left with only Best Urban Contemporary Album (Lemonade) and Best Video.

Among the big winners of the evening was David Bowie, who posthumously received an acknowledgment from the Recording Academy that he never achieved in his lifetime, with awards in the main categories including Best Rock Song (Blackstar) and Best Alternative Album (Blackstar, out on ISO/Columbia), among his five awards. Overall, it was mostly a Sony Music evening, with wins from Beyoncé, Adele and David Bowie.

The awards saw the rise of Chance The Rapper as one of the most influential new talents. The rapper picked up gongs for Best New Artist, Best Rap Album, Best Rap Performance (No Problem) beating the likes of Drake and Kanye West. Drake was among the biggest stars to miss out in some of the biggest categories, only taking the award for Best Rap/Sung Performance and Best Rap Song (both for Hotline Bling) as were Justin Bieber and Rihanna, who left empty handed.

The evening saw some particularly strong performances from the likes of The Weeknd with Daft Punk, Beyoncé, Bruno Mars, Katy Perry and Skip Marley, Lady Gaga and Metallica and A Tribe Called Quest with Anderson .Paak.

Lady Gaga showcased her versatility as performer when, one week after he winning performance during Super Bowl halftime, she joining forces with Metallica and sounded as if she had been part of the band from the start, enjoying stage diving and crowdsurfing. Who else can move with such ease from Tony Bennett to Metallica?

The Grammy winners in the main categories: