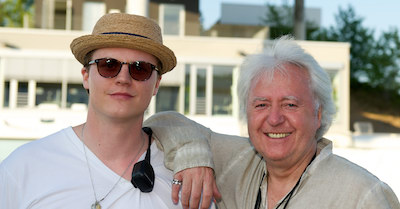 Oliver Hoppe has taken over the role as managing director of Wizard Promotions Konzertagentur GmbH, a subsidiary company of DEAG Deutsche Entertainment AG for the past four years.

Ossy Hoppe remains closely associated with the company as Chief Advisor Artist & Repertoire and will support particularly the agency and artist network. This now completes the well-prepared and far-sighted management transfer which will ensure that the company is continued to be managed successfully in the future also across the generation change.

Ossy Hoppe is regarded as the trailblazer of hard rock in Germany. During the past four decades he has shaped and influenced the development of live music from various positions. Already early on, he worked closely together with artists such as Deep Purple, Mike Oldfield, Gary Moore and Whitesnake. In 1981, he established, together with his company Shooter Promotion, one of the first big festivals in Europe – the „Monsters of Rock“. Hoppe lived for a longer period in England and the USA and worked, partly still to the present day, with greats such as Aerosmith, Kiss, Iron Maiden, Sting, Metallica, Bee Gees, Tina Turner, Bon Jovi, Guns n Roses, Rolling Stones, U2 and many more.

Since 2004 Ossy Hoppe has been continuing his work in the live business with the newly established Wizard Promotions Konzertagentur GmbH which focuses on, amongst other things, the promotion of new artists.

In 2012 Oliver Hoppe moved up into operative management. His professional experience in brand strategy which he gained from the strategic consulting of Ledavi Emotional Brand Building since 2007, amongst other roles, offered Wizard Promotions more marketing and communication expertise. This new expertise was, for example, responsible for the immense comeback success of the band Böhse Onkelz which resulted from the innovative launch campaign of the open air series at the Hockenheimring in 2014 and 2015 as well as the soldout arena tour (20 shows) in 2016 with a combined total of 850,000 visitors. In this way, the agency has been able to further develop its position in recent years as one of the leading concert agencies in Germany. This can also be seen in the current year with many up and coming bands such as Blackberry Smoke, Steel Panther, Monster Truck and the Grammy winners Ghost and Chris Stapleton as well as tours by established greats such as Aerosmith, Kiss, Iron Maiden, Bryan Ferry, Foreigner, Zucchero and, of course, the first edition of the Matapaloz Festival at the Hockenheimring in June 2017 featuring bands such as the Böhse Onkelz, Slayer, Five Finger Death Punch and many more.

Ossy Hoppe: “I am extremely pleased and, at the same time, also reassured to be able to fully hand over the management to my son. It was always my great wish that Oliver would continue my work and with his many years’ experience as well as considerable professional expertise he unites all the elements which will guide the company into a successful future. Oliver has been managing the business for already some time now and the transfer was a smooth processes. I will, of course, continue to advise the company and support artists with whom I have a long-standing relationship.”

„The flair, creativity, charm and also assertiveness with which Ossy Hoppe creates and successfully realises ideas and projects is unique. Oliver Hoppe is exactly the right manager to guide the idea and spirit of Wizard Promotions into the future together with his strong team and provide the right impetus. I really enjoy our collaboration and look forward to further joint cooperation on the successful development of Wizard Promotions,” says Christian Diekmann of DEAG.

Oliver Hoppe: “I thank my father and DEAG Deutsche Entertainment AG for the trust and feel honoured to continue the history of the Wizard Promotion concert agency into the future as one of the leading concert organisers in Germany. With a strong and homogenous team, we have successfully managed to respond to the new challenges of the event market in recent years with the values and core competencies of a traditional tour event organiser as the foundation. I really enjoy the interesting work of combining innovation culture with the classic values of a family business.”