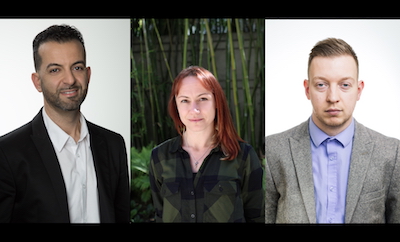 The announcement complements UTA’s appointment of Greg Janese to lead the agency’s corporate and special events division, along with the recent announcements of Rob Walker as a music agent and Toni Wallace as head of Music Brand Partnerships.

The firm said the additions would ‘focus on new opportunities for artists and to establish partnerships across all areas of entertainment and building new businesses around clients’.

“We are committed to continuing to hire industry leaders who will collaborate across the agency to maximize opportunities for clients. Each one of these agents brings an extraordinary understanding of the business and we are excited to utilize their expertise and skills as we continue to expand our suite of services.”

Mike Guirguis will focus on creating new opportunities for artists, including establishing new partnerships across all areas of entertainment and building new businesses around clients.

Most recently, Guirguis was the founder of NiteVision Management where he managed such notable artists as Chris Brown, guiding the singer to the top urban touring act in 2015, as well as multiple number one Billboard hits.

In addition, he managed Teyana Taylor, DJ Sourmilk, and Dave Aude among others.

Guirguis also was a member of the management team for R&B artist Akon, and NiteVision formed a co-venture with Akon’s record label, KonLive Distribution. Prior to NiteVision, Guirguis was a senior radio executive at Emmis Communications. He began his career as an executive at iHeartRadio KOST 103.5 FM. Guirguis will be based in Beverly Hills, CA.

In a move designed to strengthen UTA’s international booking department, respected UK agent Bex Majors has moved to the U.S. and will be based out of the agency’s Beverly Hills office.

She will book international dates for a diverse roster of artists including Amanda Palmer, PVRIS, Neck Deep, Halestorm, Highly Suspect, Creeper, Starset, Attila, The King Blues, K.Flay, and Manchester Orchestra, among others.

Majors began her music industry career as a promoter in Cardiff, Wales. She then went on to become the in-house promoter at Cardiff Barfly, followed by a stint as booking agent at UK dance music promoter Helter Skelter in 2005.

In 2006, she joined CAA where she played an essential role in developing the music division. Throughout her career Majors has worked with a wide array of talent including Mercury and Grammy Award winners, while delivering thousands of sold out shows globally.

Wood began his talent agent career in 2007 at Create Music. He moved on to Mission Control Artist Agency in 2009, where he built a significant UK urban roster including Tinie Tempah and Wiley.

In 2010, Wood joined William Morris Endeavor (WME) where he booked acts internationally across the hip hop and pop spectrum, representing talent such as Alexis Jordan, Blue, Section Boyz, Tinie Tempah, Tinchy Stryder and Wiley. Wood was featured in Music Week’s “30 Under 30” list in 2016.

In 2015, the music division significantly expanded with the acquisition of The Agency Group, the world’s largest independent music agency, with offices in New York, Nashville, Toronto, Miami and Malmo, Sweden.