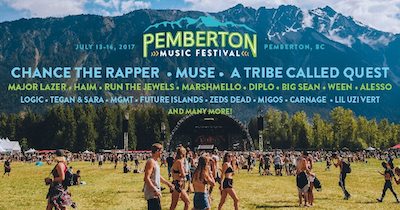 Canada’s Pemberton Music Festival has cancelled their 2017 event due to bankruptcy. The festival was scheduled for July 13th-16th in Pemberton, BC.

The festival was supposed to feature performances by high-profile acts like Chance The Rapper, Muse, A Tribe Called Quest, Major Lazer, Run The Jewels, and more.

The Pemberton Festival has been coming to British Columbia every year since 2014, and this year’s edition was set to go down in July, with Chance The Rapper, a Tribe Called Quest, and Muse as headliners. That won’t be happening. The festival itself has gone bankrupt, and tickets will not be refunded.

According to The Globe And Mail, tickets for this year’s festival started at $369, and buyers are now attempting to cancel their credit-card payments. Event promoters Huka Entertainment had only sold 18,200, compared to 38,000 last year.

Ernst & Young’s Kevin Brennan, who is overseeing the bankruptcy proceedings, says, “Really it’s just driven by fewer ticket sales than they had hoped to achieve and operating costs that had continued to rise, partially a result of the exchange rate as well.” The event owes $2.5 million to creditors, which means ticket buyers could have a hell of a time getting their refunds.