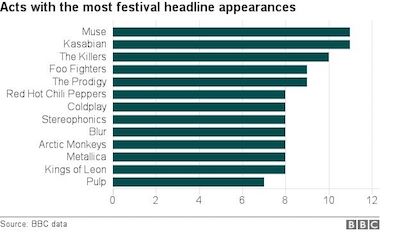 Music festivals fail to reflect the diversity of the UK music scene, with headline slots being dominated by a small band of male rock acts over the decades, a study suggests.

Some eight out of 10 top slots were occupied by all-male acts, analysis of more than 600 headline appearances across 14 major festivals found.

And a quarter of all headline slots were taken up by the same 20 acts.

Musician and writer Emmy the Great said the music industry was "skewed towards a male demographic".

She said: "If we continue talking - and we continue investigating and agitating - hopefully, naturally, things will become more inclusive.

"We have got such amazing musicians in the UK who are women. What about a festival that wasn`t just women-led headliners, but also most of the bands?

"It`s not just the headliners that are imbalanced, it`s acts all across the board, and we all know there are people making music that are not just white men. If someone decided to reflect that in their line-up, they`d be celebrated."

Male rock acts such as Muse, Kasabian and The Killers dominated the festival headline slots in our analysis. Twenty acts - or about 6% of the 308 acts in our sample - took up 24% of all headline slots.

Dr Simon Warner, a popular music researcher at Leeds University, said: "There remains a small number of groups who can actually generate consumer interest, and I think it`s down to sheer economics.

And there was a stark gender imbalance.

In our study, only 37 headline performances involved all-female acts, while 68 were bands of mixed gender.