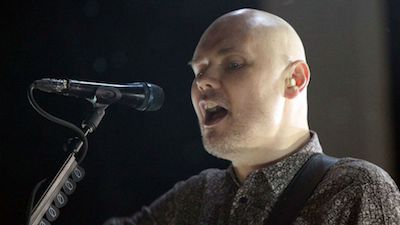 Three-fourths of the Smashing Pumpkins` classic lineup will reunite for a North American tour this summer.

The trek marks Billy Corgan, guitarist James Iha and drummer Jimmy Chamberlin`s first tour together since 2000, though the band`s original bassist D`Arcy Wretzky will not join the trio.

The Shiny and Oh So Bright tour starts July 12th at the Gila River Arena in Glendale, Arizona and wraps September 7th at the Ford Idaho Center in Boise, Idaho. Tickets go on sale February 23rd at 10 a.m. local time with complete information available on the Smashing Pumpkins` website.

The tour notably coincides with the 30th anniversary of the Smashing Pumpkins` formation. During the tour, the band will exclusively play songs off their first five albums: 1991`s Gish, 1993`s Siamese Dream, 1995`s Mellon Collie and the Infinite Sadness, 1998`s Adore and 2000`s Machina.

The official tour announcement comes after a lengthy buildup that included plenty of open secrets and in-fighting. Corgan first teased the reunion on Instagram in January, saying he was in the studio with Iha, Chamberlin and producer Rick Rubin. Not long after, when a countdown clock started ticking away on the Pumpkins` website, Wretzky gave an interview with the music site Blast Echo in which she blamed Corgan for excluding her from the reunion (the full Smashing Pumpkins classic lineup hasn`t performed together since April 1999).

The interview prompted the Smashing Pumpkins to release a statement before officially announcing a reunion in which they claimed they`d invited Wretzky to partake in the reunion in various ways. "For despite reports, Ms. Wretzky has repeatedly been invited out to play with the group, participate in demo sessions, or at the very least, meet face-to-face, and in each and every instance she always deferred. We wish her all the best, and look forward to reconnecting with you all very soon."

In a follow-up interview with Alternative Nation, Wretzky claimed that Corgan had never intended to hire her full-time and had instead enlisted Jack Bates, the son of New Order`s Peter Hook, to play bass. Instead, she said, Corgan planned on her making special appearances, similar to Steven Adler`s sporadic cameos during Guns N` Roses` recent reunion dates. "The fucking nerve," Wretzky said, "and then for him to come back and say, `Well, we haven`t seen you in this long, and you haven’t done this, and you couldn’t even make it to this. Everyone has shown up, and you didn’t?’ How could I, I didn`t even know you were there."

The band announced the Shiny and Oh So Bright tour with a short video soundtracked to the group’s hit, “Today.” In the clip, two grave angels – looking like grown-up versions of the cherubs on the Siamese Dream cover – torch a Smashing Pumpkins heart logo and watch as it burned.