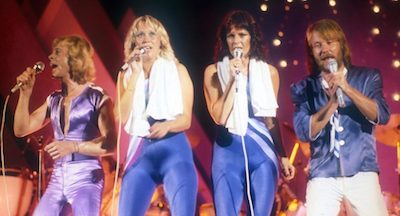 Abba have announced that they have written and recorded their first new songs since they split in 1983.

The Swedish four-piece, who had nine No 1 hits in the UK between 1974 and 1980, and who have sold hundreds of millions of records worldwide, announced on Instagram that they had recorded two new songs for a project in which avatars of the band will perform.

The band said in a statement: “The decision to go ahead with the exciting Abba avatar tour project had an unexpected consequence. We all felt that, after some 35 years, it could be fun to join forces again and go into the recording studio. So we did. And it was like time had stood still and we had only been away on a short holiday. An extremely joyful experience!”

One of the two new songs that resulted, called I Still Have Faith in You, will feature in a TV special to air in December.

The statement concluded: “We may have come of age, but the song is new. And it feels good.”

Abba’s Björn Ulvaeus revealed details of the band’s forthcoming project in Brussels earlier this week. The centrepiece is the two-hour TV show co-produced by NBC and the BBC, which will see the band perform as computer-generated avatars. Ulvaeus said the band had been digitally scanned and “de-aged” to look like they did in 1979, when they performed their third and final tour.

The avatars are then set to tour the world from next year.

Abba formed in Stockholm in 1972. They comprised two couples: Ulvaeus and Agnetha Fältskog; and Benny Andersson and Anni-Frid Lyngstad, all of whom had enjoyed musical careers in Sweden. The group burst on to the international stage after winning the Eurovision song contest in Brighton in 1974 with their song Waterloo.