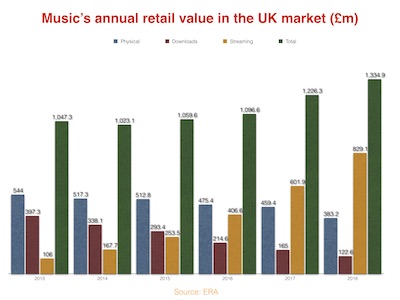 This growth, up 8.9% year-on-year, was driven by an impressive 37.7% rise in subscription streaming revenues, which hit £829.1m last year, according to preliminary data from the Entertainment Retailers’ Association (ERA).

Such positive results, however, masked a torrid year for the traditional album in the UK – during a 12 months which ended with the news that Britain’s biggest specialist entertainment retailer, HMV, had fallen into administration.

You’d have to rewind all the way back to 2012 to find a year where overall album unit sales declined to the same degree (-13.2m).

Back to the good news: the rise in the overall UK market – all thanks to streaming – meant that recorded music enjoyed its fourth successive year of growth in 2018.