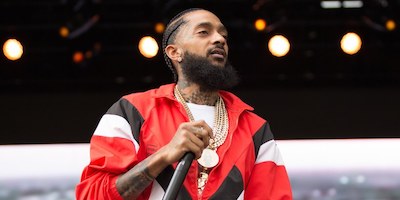 Artists including Drake, Rihanna and J Cole have paid tribute to Los Angeles rapper Nipsey Hussle, who has been shot dead in Los Angeles.

The 33-year-old was gunned down outside his clothing shop.

Drake described him as "a man of respect and a don", while Rihanna wrote on Twitter: "This doesn`t make any sense! My spirit is shaken by this!"

Two other people were wounded in the shooting outside Marathon Clothing in south Los Angeles.

The musician died as a result of gunshot wounds to the head and torso, the Los Angeles County coroner said on Monday, ruling the death a homicide.

Lt Chris Ramierez of the Los Angeles Police Department told media at the scene of the shooting that they were looking for a black male suspect.

Nipsey Hussle`s debut album Victory Lap received a nomination for best rap album at this year`s Grammy Awards, where he was nominated against Cardi B, Mac Miller, Pusha T and Travis Scott.

Writing on Instagram, Pusha called him a "rare breed" adding: "Sad to see you go Nip, I`m only finding peace in knowing you are blessed... I was honoured to share in such an amazing year with you musically.

"I would gauge everyone`s music credibility based on if they mentioned you."

Drake, who won a Grammy on the same night and recorded the 2009 track Killer Nipsey Hussle, also took to Instagram to pay tribute. "My whole energy is just at a low right now hearing this," he wrote. "We just linked for the first time in years and said we were gonna do a new song this summer cause it had been too long.

"You were having the best run and I was so happy watching from distance fam nobody ever talks down on your name you were a real one to your people and to the rest of us."