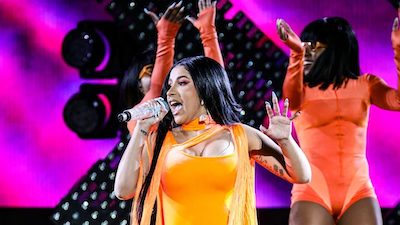 More than 135,000 attended Wireless Festival in London`s Finsbury Park, July 5-7, which marks a new record according to promoter Festival Republic.

Cardi B celebrated her first UK festival headline slot on Friday, and brought out both Lil Nas X and Migos during her set. The trio from Georgia had performed their own set right before Cardi B.

Saturday was headlined by Travis Scott, while Rae Sremmurd closed the festival on Sunday, right after local hero J Hus had played his first full set in the capital in over a year.

Throughout the weekend, guests were treated to surprise appearances by artists including JME, RAYE and Skepta. Steel Banglez brought out Manchester City star player Raheem Sterling, and Stefflon Don was joined on the main stage by Idris Elba, who spat his verse on "Boatsy."

Future also gave a nod to the thriving UK scene with guest appearances from Krept & Konan, NSG and more during his main stage performance.

Wireless Festival also gave some of the hotly tipped newcomers a stage, including Megan Thee Stallion and Denzel Curry, who performed in a wheelchair after going "too crazy," in his own words, the night before at Longitude Festival in Dublin, Ireland.

Festival Republic has already set the dates and put tickets on sale for next year`s Wireless Festival, July 3-5.