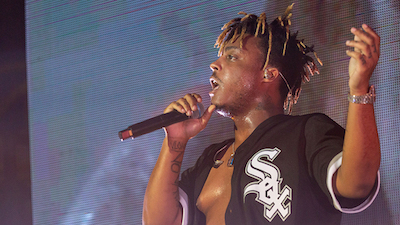 The musician, who rose to the top of the charts with the Sting-sampling hit “Lucid Dreams”, suffered a “medical emergency” at Chicago’s Midway International airport on Sunday morning, police said. He was taken to hospital, where he was pronounced dead.

Lil Nas X and Camila Cabello are among the figures from the music world who paid tribute to Higgins after news of his death emerged.

DJ Zane Lowe described Higgins as a “thoughtful and gifted artist” whose music had an “enormous impact on millions”.

“I always looked forward to seeing him. I’m so sad to know that won’t be possible anymore,” he added.

Cook County medical examiner’s office confirmed it had been notified of Higgins’ death. An autopsy had not yet been conducted but police said there were no signs of foul play.

Chicago Fire Department spokesman Larry Langford said a man in cardiac arrest was taken to a hospital from a hangar operated by Atlantic Aviation at Midway, away from the main terminal, where private planes land.

TMZ reported earlier in the day that Higgins had suffered a seizure, with law enforcement sources telling the site the rapper was bleeding from the mouth as they arrived at the scene and was pronounced dead a short time later in hospital.