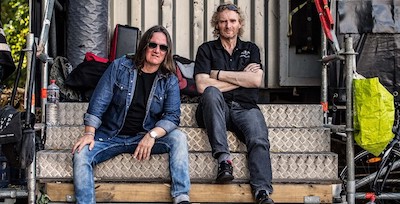 Before they co-founded Wacken Open Air in 1990, Thomas Jensen played Bass in a Band called Skyline whereas Holger Hübner acted as a DJ in their northern German home. Already then, Heavy Metal was their favoured genre and shared passion. In 1991, Thomas Jensen and Holger Hübner incorporated the company Stone Castle Rock, which from then on acted as the organiser of Wacken Open Air.

In addition to the festival, Stone Castle Rock also held concerts in northern Germany. As the company was not yet specialized in the hard and heavy sector, they also worked together with artists from various musical genres.

Almost 10 years later Hübner and Jensen launched a new company with ICS GmbH (Ltd.). Today a variety of diverse companies is gathered under the roof of the ICS GmbH that cover all areas of live entertainment. To only mention a few, there’s the ICS Festival Service, that is planning and organising concerts and other events. SST Seaside Touring is their booking and artist agency with around 30 artists of international renown, that operates worldwide. With the SH-Promotion serving under the name Metaltix, they also entered the ticket market and set up the leading platform for Heavy Metal and Hard Rock concerts. ICS currently employs about 80 full-time members of staff all year round - with the exception of the festival month of August, when the Wacken Open Air is now one of the largest employers in Schleswig-Holstein, Germany.

Stressing the importance of supporting young talent, in 2009 Holger Hübner and Thomas Jensen created the Wacken Foundation, a non-profit foundation dedicated to the promotion of young bands. The foundation funds projects such as album productions or grants tour support.

It is for all of the above reasons that Jensen and Hübner will be presented with the Lifetime Achievement Award at the 11th edition of the European Festival Awards on January 15 at De Oosterpoort in Groningen.