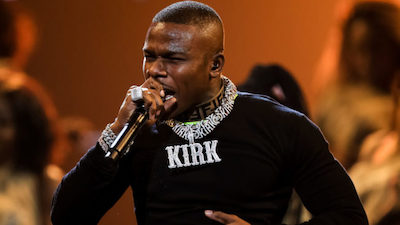 Grammy-nominated rapper DaBaby was released from jail Saturday evening after a warrant for his arrest was withdrawn, correction officials say.

DaBaby, whose real name is Jonathan Kirk, was arrested on a battery charge Thursday night in Miami after arguing with a music promoter over payment for a performance, Miami police said in an arrest warrant.

After police arrested the rapper, whose real name is Jonathan Kirk, they found a warrant for his arrest from Texas, also on a battery charge.

Kirk, who`s best known for his single “Suge,” was in South Florida for a New Year`s Eve performance at a Miami Beach nightclub. Thursday`s incident began at Novotel Miami Brickell, where Kirk was staying, the arrest report said.

Kirk, 28, approached the music promoter, who said he`d made an agreement with the rapper to perform at Cafe Iguana in nearby Pembroke Pines, the report said. The man told police he gave Kirk $30,000 but when the rapper counted it he claimed it was $10,000 short. When Kirk demanded the money, an argument broke out and Kirk punched a man who was with the music promoter.

The promoter told police he fled to his hotel room out of fear for his safety. The man who was punched told investigators that one of the men with Kirk took his cellphone, a bank card and $80 in cash.

Later in the evening, Kirk returned to the hotel and the two victims identified him to police, who arrested him. The arrest report said Kirk denied involvement in the incident.