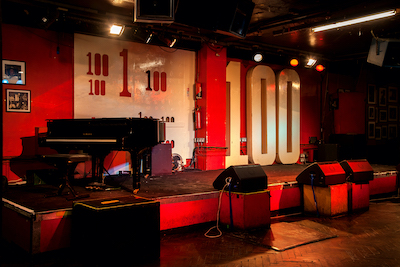 Legendary London venue The 100 Club, which hosted gigs by Louis Armstrong, The Rolling Stones, Oasis and The Sex Pistols, has been saved as a grassroots music venue, under a deal with Westminster City Council.

The Oxford Street club, which has staged performances for 78 years, spanning jazz to hip-hop, is the first live venue to benefit from a business rate relief scheme that will save the owners £76,000 a year, securing its long-term future.

The move, which grants up to 100 per cent business rates relief to small music clubs, coincides with a business rates cut for grassroots live venues across the country.

The number of live venues has fallen by a third over the past decade, in London alone.

Sir Paul McCartney played to 300 sweaty fans to help raise funds for The 100 Club, which has also staged gigs by A$AP Ferg and Paul Weller.

The club was granted status as a Community Interest Company, recognising it as a not for profit social enterprise for the public good.

Owner Jeff Horton said: “I’m thrilled the 100 Club has been granted this new business rates relief. It means we can continue to support the careers of the hundreds of artists who take to our stage each year."

"This is a game changing approach from a local authority in supporting grassroots music venues.”

Jazz, skiffle to punk
Musician Billy Bragg said: “The 100 Club has played host to some of the most dynamic pop music that the UK has produced during its eight decades of existence."

"It was the crucible of trad jazz, played host to the skiffle boom and made room for 60s beat groups. In 1976, its storied stage saw British punk rock take its first baby steps.”

“Very few venues have survived from the dawn of British pop. So news that Westminster City Council has decided to support the continued existence of the 100 Club is most welcome.”

The deal, agreed after discussions with the Music Venue Trust and London’s Night Czar Amy Lamé, uses a measure called NNDR Localism Relief. It can be used for other music venues in the London area, which can apply to qualify.