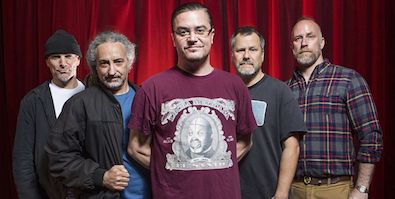 Faith No More were due to tour across the UK and Europe this summer, but they’ve now moved the shows to 2021.

The band were due to play throughout June and July, but like the majority of other artists, they’ve been forced to postpone due to the coronavirus pandemic. The run of 11 shows will now take place next summer.

Faith No More will kick off the tour with two nights at the Manchester Apollo on June 7 and 8, 2021, and wrap up with a set at Zurich’s SWI Halle 622 on July 7.

The band say: “Europe and the UK… apologies to all who have bought tickets and have been kept waiting, but there is so much uncertainty at the moment.

“We’re not happy about this but due to the current health situation there is no way we will be able to perform these shows scheduled for June and July.

All tickets purchased for the original tour will remain valid for the 2021 shows.

In addition, Faith No More have launched a fundraising campaign for their crew who are struggling financially due to the lack of live shows.


Faith No More’s Bill Gould explains: “There’s been plenty of attention about the collapse of the concert industry, how it has been impacting musicians, artists, agents, but very little coverage has focused on the impact it’s made on a crucial element of live music and touring: the crew.

“Without a band’s crew, the show does not go on, yet, in light of the recent postponements, they have been left with few options to support themselves, or their families. And speaking of families, the band that you know as Faith No More is more than the five musicians you see on stage.

“It is a larger family, an ecosystem that includes backline, a production manager, lighting, sound and tour management. We had an entire summer of touring booked – and now, as a result of this pandemic, all of our crew have been put into a seriously vulnerable financial position.

“We have been working with these folks for years, and we feel very close to them. Since shows are not an option, we are trying to do what we can to offset this unfortunate turn of events with a special merch sale.”

The fundraiser includes a limited edition t-shirt, a Faith No More logo mask along with several autographed items. Find out more.

Last week, Faith No More rescheduled their two dates with System Of A Down that were due to take place at the Banc of California Stadium, Los Angeles, on May 22 and 23. They’ll now happen on May 21 and 22, 2021.

News of the band’s North American summer tour is to be announced in the near future.