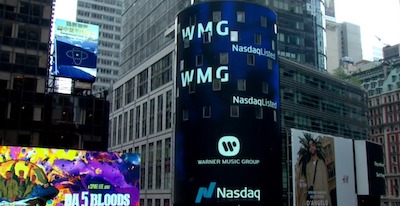 Warner Music Group priced its initial public offering on Wednesday at $25 a share, the higher end of its $23 to $26 price range, and increased the size of the deal to 77 million shares from an original 70 million shares.

The company raised $1.925 billion in the deal, after asking its bankers to delay pricing on Tuesday, as the music industry took a pause from regulator activity to express solidarity with the protesters taking a stand after the death of George Floyd in Minnesota last week.

The deal is the biggest IPO of the year to date.

The stock started trading on Nasdaq Wednesday under the ticker symbol "WMG."

The life as a public company got off to a positive start Wednesday, as the stock opened for trading 8% above its initial public offering price of $25. The first trade for the stock was at $27.00 at 11:52 a.m. ET for 7.1 million shares. It has since extended gains, to trade 15.5% its IPO price.