Q Magazine to close after 34 years 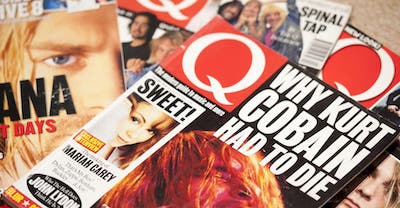 Q Magazine, a cornerstone of rock journalism in the UK, is to close after 34 years.

"The pandemic did for us and there was nothing more to it than that," said the editor Ted Kessler in a tweet.

He also shared the editor`s letter for the final issue, due on 28 July, in which he said: "I must apologise for my failure to keep Q afloat."

Founded in 1986 by Smash Hits writers Mark Ellen and David Hepworth, Q arrived at the same time as the CD revolution took off - and its glossy, aspirational format chimed perfectly with the times.

Its hefty and comprehensive reviews section not only covered new releases, but the copious re-issues that were starting to appear as record labels plundered their archives to bolster the new format.

The first cover star was Paul McCartney, closely followed by Rod Stewart and Elton John (Headline: "The wit, the wisdom, the wardrobe").

More recently, the magazine had rediscovered its voice under Kessler, who was appointed editor in 2017, and promoted revealing, in-depth interviews with the likes of Lana Del Rey, Tame Impala and The Streets; alongside deep dives into the back catalogues of The Specials and the Beastie Boys.

However, in May, Q`s owner Bauer Media put the title under review, along with a number of others in its portfolio, as sales and advertising revenues diminished during the coronavirus pandemic.

The penultimate issue of the magazine read like a eulogy, with writers past and present recalling their most memorable interviews of the last 34 years.