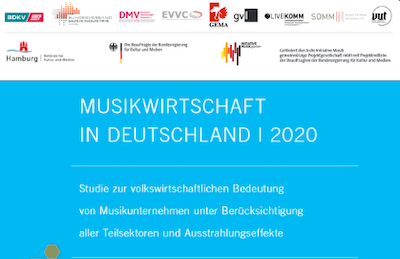 The German music industry is a billion dollar market.
But what is the specific economic significance of the individual branches of music? How is the corona pandemic affecting? And: How is music usage changing now and with regard to the future?

Answers to questions like these are provided by two studies that were presented as part of the “Music Dialogue” of the City of Hamburg in the event location “The Box”.

With the second edition of the study "Music Industry in Germany", carried out by the consulting company DIW Econ under the direction of Dr. Yann Girard, well-founded figures for the overall music market are now available again after 2015. The study recorded high growth in almost all sub-areas for the observation year 2019. However, enormous losses in sales are expected for the Corona year 2020.

The results of the fifth wave of surveys on "Music Use in Germany" already take the corona effects into account and already show the strong declining numbers for the current year 2020. The University of Hamburg team, headed by Prof. Michel Clement (Chair for Marketing & Media at the Business Administration Faculty), however, determined a consistently high level in the area of ??streaming and a growth of 96 percent in the smart speaker device segment.

The “Music Industry in Germany” study carried out by DIW Econ is based on an online survey carried out between May 11 and June 29, 2020, in which 861 companies and self-employed people took part. One of the most important results resulting from this is the realization that the branch of industry was able to significantly increase its macroeconomic contribution between 2015 and 2019.

By the end of 2019, total revenue had increased by 18 percent to 13.6 billion euros. This corresponds to an increase in gross value added of 29 percent to around 5.2 billion euros. The music sector is now the second strongest branch of the economy, after the television broadcasters, within the entire media industry and measured against the figures from 2015 due to an absolute increase of around one billion euros at the same time the fastest growing segment. When looking at the total number of people employed in the music industry, the study shows an increase of around 25 percent: at the end of 2019, around 157,800 people were working here, including 64,000 self-employed and around 93,000 employees.

In addition, the study shows that music forms an important stimulus for economic activity in many other areas such as tourism or the audiovisual media industry. The resulting significant spill-over effects have increased since 2015 with an increase of around 3 billion euros (plus 12 percent) to 28 billion euros.

Due to the corona pandemic, the music industry, which will continue to grow until 2019, is currently in an unprecedented situation of uncertainty and loss of income, which in many cases has been reducing sales to zero for months. This is mainly due to the fact that since March 2020, due to the event bans and distance rules, music events can no longer take place and thus an important drive for many sectors of the music industry has been lost. Thousands of jobs are therefore at risk due to the closely interwoven service and commercialization chains in the various sectors. This is reflected in the sales expectations of the music industry, which have collapsed significantly due to the corona pandemic.

The expected decline in sales due to Corona can already be confirmed from the results of the "study on music use" in Germany. The results of the fifth of a total of six survey waves carried out in June 2020 with 1,670 people are now available from the long-term study by the University of Hamburg. After that, monthly expenses for music in almost all formats fell sharply in Corona times. Only the expenditure for streaming shows a growth of 22 percent compared to the same period of the previous year. In contrast, however, sales of physical sound carriers in particular have fallen dramatically, with CD spending falling by 25 percent. The live area was hit even harder: spending on concerts fell by 80 percent.

When looking at the time people in Germany spend consuming music, there is also a decrease. Since the start of the study in August 2018, weekly music consumption has decreased by eight percent (one hour and 46 minutes): It has fallen from 21 hours and 29 minutes to 19 hours and 43 minutes. Conventional radio, in particular, posted a constant decline with a minus of 15 percent, which, however, is partially offset by strong gains in online radios. The latter recorded an increase of 73 percent. From the point of view of the researchers, one possible explanation for the declining music consumption can be found in the restricted mobility and the focus on news in times of the corona pandemic.

At 29 percent, the user range of paid streaming remains at a consistently high level after initial growth. The “possession” of music is becoming less relevant, which is shown by the fact that more and more participants in the study no longer have any physical sound carriers or digital music files. The use of technical devices was also examined. The growth in the area of ??smart speakers stands out in particular. 19 percent of the participants already use such a device. That means a plus of 96 percent compared to the evaluation of the first wave of surveys in August 2018. The

Covid-19 severely interrupts the impressive growth path of the music industry in recent years. Sectors that are unable to make up for lost sales are affected by the ban on events and distance rules with equal consequences. Even for those sectors that will not feel the major negative effects due to payout rhythms until the coming year, in particular this concerns authors and artists as well as their partners, the music publishers and phonogram manufacturers, via the distributions of the collecting societies, a perspective is needed to counteract these consequences. The same applies to the musical instrument and music equipment industry, which is closely interwoven with the artists and organizers. To secure jobs, accompanying measures by politics are therefore still indispensable.

As early as the publication of the first edition of the study “Music Industry in Germany” it was found that the overall economic importance of the industry is perceived less strongly than that of other media branches. Due to the effects of the corona pandemic, political awareness in particular must increase considerably. Otherwise it will be impossible for individual sectors of the economic sector to regain their overall economic importance. Fast and unbureaucratic financial help and support are now required. The events industry in particular is facing economic ruin, which will have a significant impact on almost all other areas.