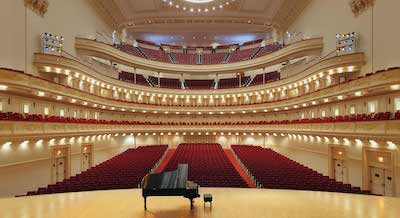 Legendary New York venue Carnegie Hall announced that it will cancel all events in its three performance venues from April 6 through July 2021 due to the ongoing effects of COVID-19.

Along with its three performance venues, Carnegie Hall’s Resnick Education Wing will be closed until fall 2021.

The shutdown means that Carnegie Hall will miss its entire season for the first time in the venue’s 130-year history.

“While we had hoped to be able to open the Hall in some capacity by this summer, it is clear that more time is required to address the COVID-19 crisis before artists, audiences, and staff can return safely,” said Clive Gillinson, Executive and Artistic Director of Carnegie Hall. “We are heartened that health conditions have slowly started to improve now that vaccines have started to become available. We will continue to consult with medical and health professionals to determine the best approach and timeline for bringing live music safely back to the Hall. Until then, I remain deeply grateful for the dedication and hard work of the Carnegie Hall board of trustees, staff, and extended family, enabling us to continue to serve audiences through music.”

Affected events include the Hall’s planned Voices of Hope festival, which will shift online and take place from April 16–30, 2021. The festival’s online line-up will be announced in late March.

A statement from Carnegie Hall said planning is well underway for the hall’s 2021–2022 season with future live programming slated to be announced in late spring 2021.