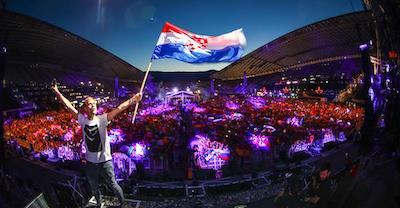 For the second time, the 8th edition of Ultra Europe, which was scheduled to take place in Split, Croatia in July, has been canceled.

Afrojack, Armin van Buuren, David Guetta, Marshmello, and Steve Aoki were among the artists confirmed for the 8th Ultra Europe festival, which was scheduled to take place in July at Park Mladezi in Split, Croatia, but organizers announced on Saturday that the festival would be postponed for the second year in a row.

Although it has been a difficult year for all of us, the world appears to be on the road to recovery, including in Ultra Europe’s host country of Croatia, where we have continuously tried to obtain approval for an Ultra Europe 2021 production.

Unfortunately, due to ongoing COVID-19 official government safety measures, specifically in relation to mass gatherings, the 8th edition of Ultra Europe has been rescheduled to July 8,9 and 10, 2022.

Tickets will remain valid and will be honored for use at the rescheduled festival. All ticket holders will be contacted via the email used for their original purchase with more information regarding their tickets and refund conditions.

While we eagerly await the chance to welcome you all back to Ultra Europe, we would like to express our sincere gratitude to all our loyal fans for the continued support and patience.

We are counting the days until we finally reunited next year in beautiful Croatia for The World’s Premier Destination Music Festival!