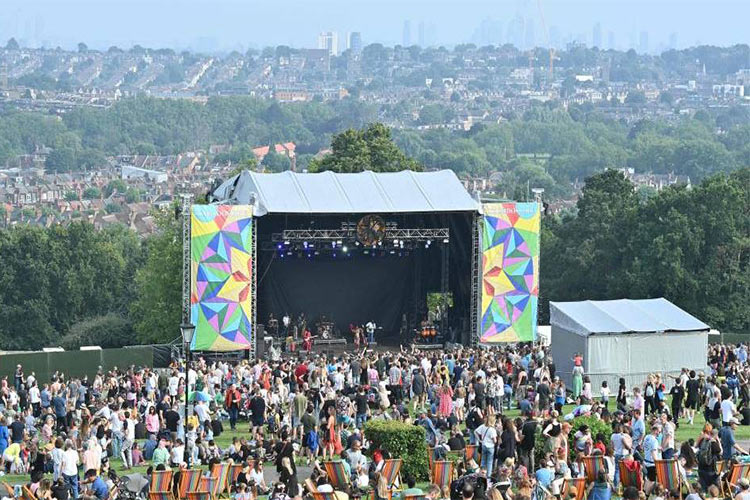 More than 10,000 people attended the sold-out Kaleidoscope at Alexandra Palace and adjacent park on July 24th.

The first London event since the Covid limitations were relaxed featured Groove Armada, The Coral, Reginald D Hunter, Norman Jay, and Phil Wang, among others.

Visitors were required to present confirmation of full immunisation or a negative lateral flow test at the venue, which can hold 25,000 people.

Headliners Groove Armada produced a run of dancefloor hits and a laser light show before The Staves, Ibibio Sound Machine, and The Coral came to the main stage.

Festival director Simon Fell who is also Alexandra Palace`s Director of Event Operations said: “It’s hard to put into words how it feels to see the return of live music and crowds after 18 long months.

He added: "We wanted to offer a summer festival experience that people have been missing out on in recent times, and we were delighted to do just that. The smiles, the energy and the euphoria felt like the Summer of Love. A truly magical moment that will live in the minds of everyone who came, who played and who worked at this historical event".

Fell continues: “We put a lot of work into ensuring the Festival was as safe as possible too, so that people could not only have fun, but feel comfortable while doing so.

"We’ve plenty more planned up here at Ally Pally, so we hope Kaleidoscope is just the start and that our industry, which is so loved and supports so many, is ready to get moving again.”

Located in North London, Alexandra Palace is a 19th Century Grade II listed building and has over the past 50 years seen many now legendary artists perform. The 1960`s saw among others, Pink Floyd and Pretty Things perform as part of the 14 Hour Technicolour Dream. In the 1970`s, Led Zeppelin, The Grateful Dead and Wishbone Ash were among those who performed.

The venue has various events planned over July and August and September will see John Grant, Fontaine`s DC and Suede play the Iconic venue.