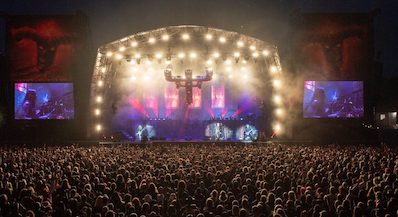 Though the post has since been removed, MetalSucks stated that Hungerford utilized social media on Oct. 14 to express her contempt for the practice of designating preferred pronouns, stating that she would delete any emails sent to her that did so.

The original comment in contention, according to MetalSucks, read, "If you`re going to start putting pronouns on your email so I can refer to you as he/him she or her I`m binning your emails …" (Binning is a term that can be used to mean putting something in the trash.)

In a later explanation on Twitter, Hungerford said the message represented her "frustration leaking out that some people now feel they HAVE to sign off with a pronoun, not necessarily just because they want to. I apologize for the way I said it and how it came across. I am a compassionate, kind and inclusive person and for me, that`s an important part of what the metal community is, or should be."

Paul Watling, Bloodstock`s booking manager — who specifies his pronouns on his Facebook page - resigned in protest. "You can NOT promote a festival of inclusivity without including EVERYONE," he said in a post on that platform. "Pity and quite frankly vile."

Hungerford, according to reports, has been employed by Bloodstock since 2001. In 2004, she was appointed director of festival booking for all acts performing on the main stage of the event.

According to a social media post by Bloodstock Festival organizers, Hungerford will be "taking a step back" from the festival and "will be taking the time to properly educate herself for a better understanding." The organizers also added, "We are ashamed and disappointed by the recent lack of understanding, awareness and opinions voiced within the Bloodstock camp. These views are not a reflection of the festival as a whole.