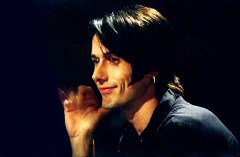 THE TEARS have confirmed details of their hotly-awaited album. The band, formed by the reformed Suede songwriting partnership Brett Anderson and Bernard Butler, release ‘Here Come The Tears’ on May 2.

It will be preceded by a single, ‘Refugees’ on April 18.

On the subject of the reunion, Anderson said: “The music is really, really inspiring. I don’t want to get dewy-eyed, but it’s so exciting to work with someone who cares so much about it.

“For years and years after Bernard left Suede it was me running the show, but now the stakes are raised. I feel like we are duelling with each other, in some kind of friendly competition. When we were at our best it was always like that, each trying to better each other.”